When you come to renew your package with us this year, you will notice that your quote will be higher than last year. But you’re not alone: nationwide, people with every energy supplier are facing price increases.

And why is that? It’s all down to the energy market. To sum it up, it’s gone pretty bonkers since Summer 2021. Understanding the energy crisis is tricky; articles online are filled with jargon and it can be information overload. That’s why we’ve pulled together this blog to break down why energy prices are rising and how Fused can support you.

What has been going on with the energy market?

There are a lot of factors that have contributed to energy prices increasing. Basically, everything is happening all at once, which has led to price hikes and energy providers going bust.

Here is the lowdown:

Lack of gas storage: There wasn’t enough gas put in storage for Winter 2022 due to Russia dramatically reducing the amount of gas they export to Europe, causing a huge impact on the energy market. This has meant Europe has had to source their gas elsewhere and has had to try to import gas via LNG ships. Most of these ships were scheduled to go to countries recovering from the pandemic, so Europe needed to bid higher prices to attract the LNG ships. This has pushed the price of gas higher.

Covid-19: More people across the world are working from home due to Covid, which means that more people are using energy. Because there is more demand for energy, suppliers have had to raise their prices to keep up on wholesale costs.

Low wind energy generation: Wind power has been lower than usual; this is because the UK had one of its least windy summers since 1961. This means the UK has had to generate energy by burning fossil fuels like gas or coal, which is more expensive.

Shutdowns of a major power cable: A major fire took place on one of the UK’s most important power cables in France, forcing it to shut down.

All of these issues have led to a huge hike in energy wholesale prices. Suppliers have reported costs being more than double than last year’s prices, and it’s expected to increase even more.

What does that mean for me?

Your current price you pay for your energy is locked in with us. But we’re not going to beat around the bush - you should expect a price increase in your energy bills compared to last year.

How does energy pricing work and how has it increased?

When you pay your energy bill, you’re not just paying for the energy you’ve used.

That’s because your energy bill is made up of many different factors. Check out the infographic to compare prices from last year to now: 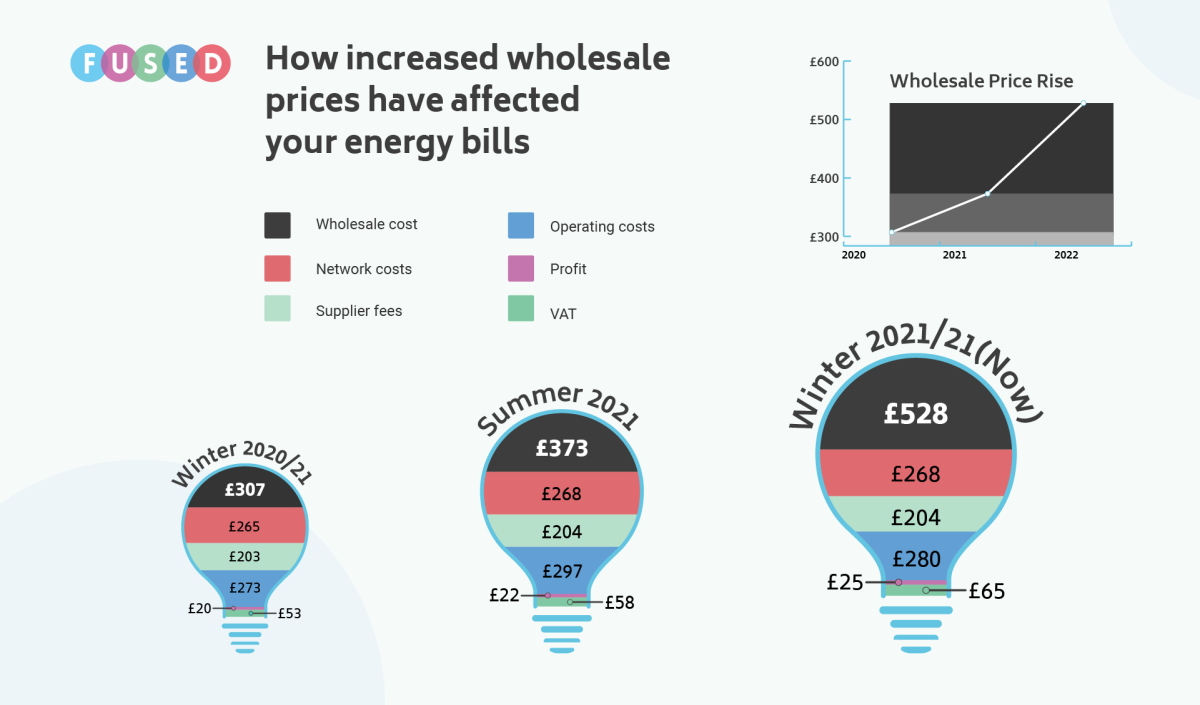 To put things simply, the price of suppliers buying energy from wholesalers has increased dramatically, more than doubled. This is why energy users nationwide have seen an increase in their energy bills.

Is my supplier safe?

In a nutshell, yes. When you take out a Fused package with us, your supplier is Octopus Energy.

Here is why we’re confident in our energy partner:

You can read more about why your energy supply is safe with us here.

How do we help you with your bills?

When you sign up to Fused, we manage all of your bills for you. Our number one goal is to make bills as stress-free as possible. That’s why we make sure you never have to chase housemates for their share, that you can easily budget with the same monthly payments, you’ll never have to call suppliers and you’ll never have bill shock.

You’re probably not aware of everything we manage with our service, but here is the breakdown:

We’re here for you

We manage the bills for you; that’s our job. We’re here to deal with all of our customers and any billing problems, including the energy crisis.

If you have any questions about what the energy crisis means for you and your bills, you can book a callback to speak to our customer support team.